“Animis opibusque parati” So reads the inscription around the shield on one side of the Great Seal of the State of South Carolina. This phrase came to my mind lately as I thought about my responsibilities and activities during the changes that have come to the way we live and work.

The phrase is familiar to me because much of the state’s seal appears on the class rings of graduates of The Citadel, the Military College of South Carolina, which I attended. I can call up the information quickly because I possess one of these rings and was required as a so-called “knob” to memorize the features and symbolism of The Ring to their finest details. But that’s not important right now.

Even as proposals were made to restrict the movement and interaction of people in the hopes of curtailing the spread of the nasty little bug, I began running through a mental checklist to gauge our preparedness for the increase in remote work and communication. If you look back at some of what I have written, you will see that a several topics have to do with resources necessary for working in this fashion:

With the reduced number of people physically present in the office, and with the Karimu conference center closed for the time being, I have been able to make changes and upgrades sooner than I had anticipated. Remember the failures I wrote about in March to integrate our phone lines into a new router? Well, the slowdown in work on the center allowed me the freedom to concentrate on the problem and make a breakthrough. Just in time for increased usage, our phone system is operating exactly as it should be!

With all these resources in place, I was able to put together instructions for using each of them and send people off with their own laptops or borrowed ones. I continue to go to the office each day to monitor the systems and to be ready to help folks no matter where they are. Our next big challenge will be conducting the annual member meeting next month, but I think we’ll be ready.

So as I look at how the present situation has affected my work, I am thankful to the God we serve that he has prepared me for this time and has given me success in areas that make a difference to my colleagues and, in turn, to those still waiting to have God’s Word in their language. Not one of us is thankful for the virus, but the faithful can be thankful to the God who changes us and who prepares us to bear difficult events and circumstances in this life. We have an advantage, you know, because we know how the story ends.

“I have told you all this so that you may have peace in me. Here on earth you will have many trials and sorrows. But take heart, because I have overcome the world.”

The other side of South Carolina’s seal bears another inscription: “Dum spiro spero”. It means, “While I breathe, I hope.” Below this phrase appears the word for hope itself, Spes. Such a saying is not a bad thing to keep in mind during the present trial.

In other aspects of life, Katherine, the boys, and I are experiencing and enduring much of the same things you are. The effects are perhaps less, since we live in a fairly rural area and there is a lower infection rate. What has not lessened, but rather increased, is our thankfulness for the faithfulness of the people who continue to pray for us and give to our ministry with Wycliffe. Nothing has stopped the spread of the Good News in the past, and this virus will not do so now. Thank you for helping Wycliffe keep spreading the good news of hope in Jesus!

Back in March, I heard that there had been a little incident on the construction site at Wycliffe Germany, where they are busy expanding their lodging and meeting facilities. In the initial excavation phase, a machine had severed some of the phone cables that traverse the center. Oops. Most of the lines in two buildings lost their connections, and several others were reduced to poor quality or instability.

Later that month, I was approached by their business manager about the possibility of installing a VoIP-based phone system to restore the lost phone lines. (The network cables had been untouched.) Such a system is what I installed in our own office in 2013. One difference was that this new system would have to work for a while with what remained of the old one. It was destined to become the only system, but it would be just a workaround in the meantime so that some important calls could get through.

To make a long story short(er)—remember, this happened back in March—my colleague and  I installed the new system and the first of the phones. (That was a really long workday.) Later, we tested and recommended some cordless units to put to work in the tricky areas where corded desk phones just won’t work. Slowly, we are going to plan and install our way from the initial workaround to the final replacement system.

It seems that we’ll be needing some kind of workaround at home, too. The road through our village is being repaved and the sewer system renovated, and the sewer work is right in front of our apartment now. On Friday, the excavator stumbled upon an undocumented pipe—our building’s drain pipe, from all appearances. If the window’s open, and we run a little water, then within minutes we hear a trickling outside. Fun, huh?

Earlier, I didn’t mention that one of the phones I replaced is the one used by my wife. If I can wrangle a picture or two out of her at work this week, I’ll write about what Katherine is up to these days over at Wycliffe Germany. 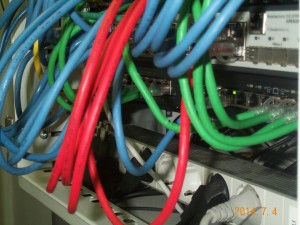 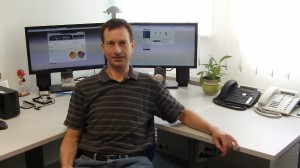