Have the folks you work for ever been short of the right number of people in the tech department?

I wrote that Wycliffe is in the process of shuffling people from one email system to another. That’s a big job. There are probably more people than ever in jobs like mine, but it seems that there aren’t quite enough to make this project go as smoothly as we might hope. 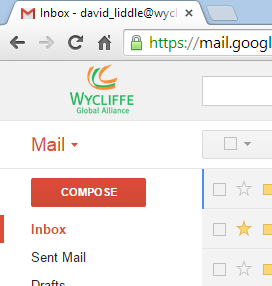 So I finished the accounts for Wycliffe Slovakia, and my colleagues here are working on accounts in Switzerland, Finland, France, and other countries, bit by bit. I moved on to the accounts at the organizational level above us, to finish off the folks at the top. (No pun was intended there … OK, it was, but only in fun.) I have just a few stragglers to chase down in that group.

With my plate nearly clear, I’ve offered to work on other groups who seem to need help getting going. I can see from our records that there are many accounts waiting to be moved in these places. They just don’t have tech workers free to put their time into this task of ours.

Next stop? The Americas, apparently. Not Wycliffe USA, mind you—they’re all done with their staff. And not Canada, either. I’m talking about the people who help and guide the Wycliffe offices in Central and South America. They have a few dozen accounts that need to make the move—but they don’t have anyone else to work with them right now.

Clearly, the difference between time zones (3-7 hours?) is going to reduce the time each day that I have to get connected with people. If you think of me while praying, please pray for good, timely communication, clear thinking, and quick, skillful work. Thanks!

P.S. Here’s a shout-out and some accolades for the Bomgar company, whose technology makes such work possible. They’re terribly good to us, and we couldn’t do it without them!

You can take the look of surprise off of your face now. Yes, I am writing another update, after months of silence.

Even under normal conditions, I have never been the type to write or call home much—my mother will testify to that. The past several months of my work have been addressing communication itself and have highlighted its blessings and curses, its joys and sorrows, its ease and difficulty.

Much as we did in 2009, our family of organizations in Wycliffe are moving to yet another email system. The last time, only about 1500 accounts switched—this time, all of the accounts are being changed. Spurred on by a desire to add services and reduce maintenance and complexity, this crew of thousands is migrating from our home-hosted email system to Google Apps for Nonprofits.

Thankfully, we have a lot of clever people working for us, and these folks made the process quite easy. It’s so easy, in fact, that the whole project is about 80% complete. But guess whose part of the world represents most of the remaining 20%?

So far, I myself have managed the move for my brothers and sisters in Sweden, Hungary, Romania, Denmark, and the Netherlands. I’m now working on the few accounts in Slovakia.

The tricky part? Communicating with all of these people in such a way that each person clearly understands what is happening and knows what I need from him or her to give the move a happy ending. Most of these people didn’t grow up speaking English. Though each can use it quite well, there have been plenty of instances in which I let a subtle phrase or word choice worm its way into my instructional messages. I’m trying to bring these people a benefit to their work, but things like language or past email practices can pose a hindrance.

Indeed, there have been ups and downs to this experience. My thoughts during such times recall one of the last things that Moses did with the Israelites before his death. God told him to put half the tribes on Mt. Gerizim and the other half on Mt. Ebal. Blessings would be pronounced from the former and curses from the latter. The tribes would be given a choice about the future—to do what is right and be blessed, or to do what is wrong and be cursed. It’s an interesting read; you can find it in Deuteronomy 27.

Many promises are made about technology, both that which exists now and that which is promised in the future. We humans often treat technology as something of a “promised land”. Like Canaan for the Israelites, there are both blessings and curses to be found in this new land. We see every day that there are right ways to use technology—and there are wrong ways to use it. It can be a help to us, and it can be a burden to us.

My job with Wycliffe is to direct people to the helpful side of technology and to battle against its burdensome side. It sometimes feels as though my chair is perched on the edge or line between those two places. With your prayers, friend, and your support of our ministry, you ensure that hundreds of Christians working for the cause of Bible translation are not without that guidance. Thank you!

When I was in high school, I started swimming competitively year-round. One lesson I learned from my coaches, which has impacted how I work and live, is that the athlete must always swim to the wall, in practice as well as in competition. Often, in practice, we would slow down as we approached the wall at the end of a series, and sometimes we didn’t even touch the wall to complete the distance we were supposed to swim. Our coaches hated that lazy habit and drilled us out of it. “If you do that in a race,” they said, “your effort will count for nothing – you didn’t finish the race! Always swim to the wall. Finish! And if you swim to the wall in practice, you will do it in the race.”

Would Michael Phelps have won so many gold medals in 2008 if he hadn’t swum to the wall with everything he had in him?

My email migration team and I are approaching the wall in our project. We are on an excellent pace, doing far better than I expected – we have finished more than 95% of all the accounts. I expect us to be done by the end of this month. But we can’t let up now and just coast in, and we can’t stop short of completion. The last 5% require more effort now that we’re so close.

We have a mix of people who are left. Obviously, there are folks who have put off the process as long as possible. I understand that. Do you remember worrying over the order in which kids were to present their book reports in school? Most kids wanted to be at the end – and they’re the same way now as adults! There are also people who have schedules that are difficult to accommodate, and there are people who are traveling out of the country.

This week, I have to orchestrate the migration of some accounts for a couple who are so far out in the boonies on the other side of the world that they’re not even in email contact. I have to plan this in such a way that they don’t freak out when they return to the nearest city and that there’s someone on hand who knows enough about the situation to help them “get connected” again. These people are folks I do not wish to disappoint – the fellow’s a well-respected anthropologist who helps translators understand the people they’re working with. This cultural knowledge helps the message of the translated Bible really shine into the hearts of the people who read it.

So please don’t stop praying for my team and me – we want to touch the wall at full speed! (And not just with email!)

“Not that I have already obtained all this, or have already been made perfect, but I press on to take hold of that for which Christ Jesus took hold of me. Brothers, I do not consider myself yet to have taken hold of it. But one thing I do: Forgetting what is behind and straining toward what is ahead, I press on toward the goal to win the prize for which God has called me heavenward in Christ Jesus.” (Paul, in Philippians 3:12-14)