Once we returned from that working vacation to Austria during spring break, the preparations for our return to the U.S. began in earnest. It was a busy time that had its high and low points. To be honest, getting settled here in Lancaster, Pennsylvania, has those extremes, too. Let’s try to keep things on the bright side, shall we?

Katherine and I are thankful that our household belongings in Germany are safe—and only stored in two places. A couple from church generously offered the use of a room in their cellar, at no cost to us! And Wycliffe Europe Area allowed us to store items in unused attic space that they have. Maneuvering things into those spots was often a challenge—especially during rainy days—but we are pretty satisfied with the results. The old apartment was emptied and turned over to new faces.

It took me a while to distribute the nearly 400 pounds of luggage among our eight allowed bags, but I managed it. How does one pack to spend a year ‘away from home’ while ‘at home’? We’re still not sure, but this is what it might look like: 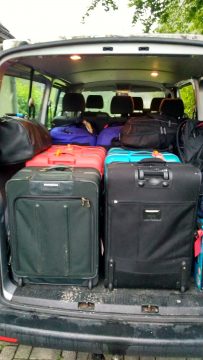 Shortly before we left, C celebrated the end of his two-year-long Bible study course, which he completed with other youth his age at the church we attend there. It’s not easy to get all four of us into one picture, but again, we managed it! 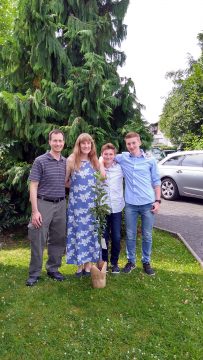 In fact, we did it a second time a little bit after that. At the outskirts of every city, town, and village in Germany, there are signs indicating the town limits and the distance to the next place along the same road. I thought that you might be interested to know how far we’ve come on our ‘road’ to the U.S.: 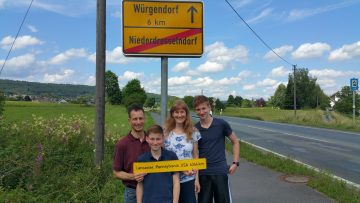 After arriving, we recovered from jet lag and began getting reacquainted with the Lancaster area. It’s now been one month since I collected our stateside things from storage and brought them to where we are now:

As for where that is exactly, I have no objection to telling you outright—the address will be in the next newsletter. However, being an aficionado of cartography and ingenuity, I think it would be more fun to do it another way. There are three words that can describe where we live now. Those three words are “erupted”, “dockers”, and “imitations”. Write to me to confirm your guess. If you don’t figure it out, contact me so I can send you information on a fascinating way in which truly remote areas are getting addresses.

How can you pray for us now? Well, moving stinks. Being close to family is great. The differences between the German and U.S. school systems can be challenging and confusing. The good start those strapping young men have at school and in youth group is encouraging and relieving. The distance we have to go yet in settling and getting reconnected with supporters spread across half the country is intimidating. That’s when an excerpt from Paul’s letter to the Romans comes to mind:

We can rejoice, too, when we run into problems and trials, for we know that they help us develop endurance. And endurance develops strength of character, and character strengthens our confident hope of salvation. (Romans 5:3-4)

Our hope of salvation is one of the driving forces behind our ministry with Wycliffe. We’re glad to know that you’re reading, and praying, and helping to keep us moving. Thank you!

I grew up in Media, Pennsylvania, close to Philadelphia. I graduated from The Citadel in 1994. In 1995, I joined Wycliffe Bible Translators and have served in Africa, the United States, and Germany. Katherine and I were married in November 1998. View all posts by David Liddle